TEDCO Generates $1.6 Billion in Economic Benefits to the State of Maryland and Supports 7,746 Maryland Jobs, According to New Independent Study 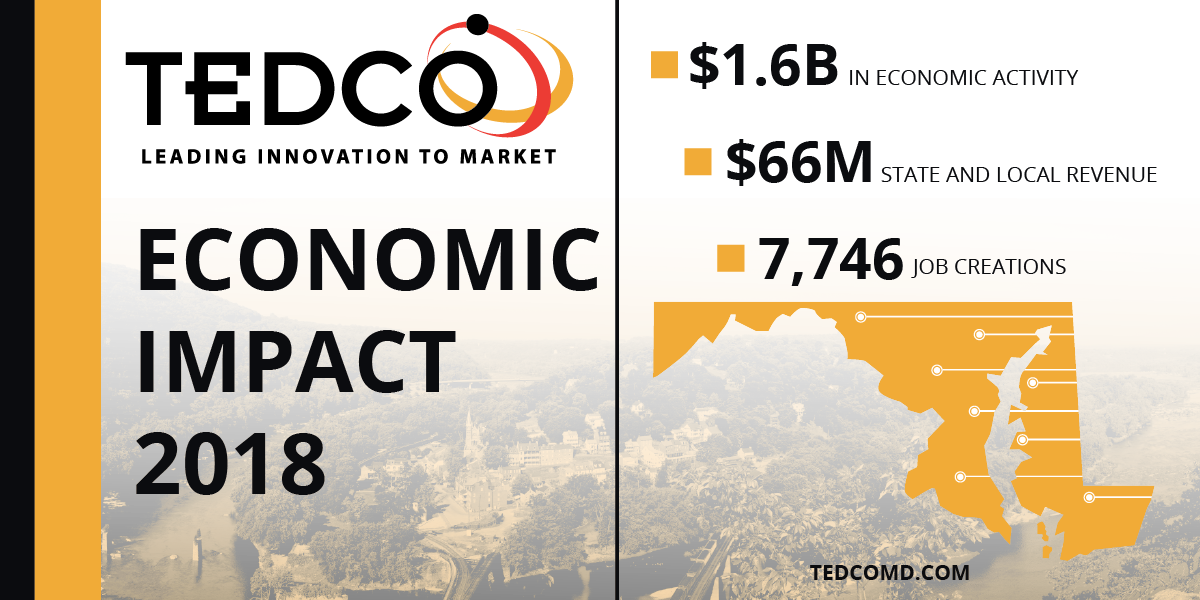 Conducted by Richard Clinch of the University of Baltimore’s Jacob France Institute and Mitch Horowitz of TEConomy Partners (JFI-TEConomy), the study found that TEDCO is a significant economic driving force, supporting 7,746 Maryland jobs and more than $1.6 billion in statewide economic activity in 2018.

The study says TEDCO has generated significant economic and fiscal returns to the state. Reviewing the change from 2015 to 2018, TEDCO’s economic impact included job creations from 4,358 in 2015 to 7,746 in 2018. TEDCO’s total economic impact has also seen a significant increase from $1B in 2015 to $1.6B in 2018. The jobs supported by these companies earn $600.1 million in labor income and generate estimated state and local government revenues of $66.6 million, according to the study.

By 2023, the study projects TEDCO’s economic impact will increase substantially to $2.4B and will support a total of 11,812 jobs.

“This study shows that, since 2015, TEDCO has delivered dramatic and measurable results in our mission of helping to bring economic development and jobs to Maryland,” said TEDCO CEO George Davis. “I am proud of the central role TEDCO plays in supporting entrepreneurs and businesses across the state.”

This growth is in part associated with an ever-growing and maturing portfolio of companies supported by TEDCO and the addition of the Maryland Venture Fund and BioMaryland Center portfolio companies, which came to TEDCO in 2015. Other programs under the TEDCO umbrella include the Seed Investments Fund, the Minority Business Pre-seed Fund, the Maryland Innovation Initiative, and the Maryland Stem Cell Research Fund. The Seed Investments Fund consists of the following: Technology Commercialization Fund; Life Sciences Investment Fund; Cybersecurity Investment Fund; and Gap Fund.

“We also looked at the cost of TEDCO’s work to the state of Maryland and found that TEDCO’s estimated FY2018 state government revenue contribution was $37.6 million, which is over double the state funding appropriation for TEDCO for that same year,” said Mitch Horowitz, the TEConomy Partners economist who co-authored the study.

“In just three years, TEDCO’s economic impacts from its core programs increased by 60 percent, while jobs created rose more than 77 percent since 2015,” said TEDCO Board of Directors Chairman Francis Smyth. “Entrepreneurs of all backgrounds and from across the state have benefited from TEDCO’s support and investment, and we are looking forward to continuing this momentum through the expansion of programs this year to focus on women and minority entrepreneurs.”

This announcement comes on the heels of TEDCO’s creation of a Task Force for Women Entrepreneurs, which will be dedicated to the recruitment, funding, and operational support of women-owned and-led startups in Maryland, a traditionally underserved entrepreneur population.